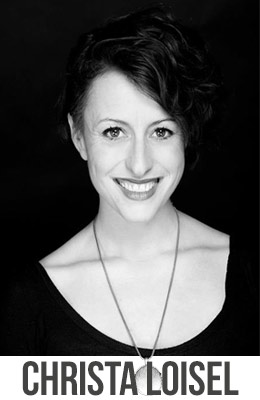 Christa is one of Ena Salon’s Top Stylists and their Senior Colour Technician. Having trained then worked her way up at Servilles (as she says “born and raised as a hairdresser”) in New Zealand for many years, Christa moved to London eight years ago to be nearer to her family who had all relocated here. She immersed herself in the British way of life and became involved in hair and fashion shows, which is where she met the men who would eventually create Ena.

Before joining Ena, Christa had a varied career combining working in top London salons with travelling all over Europe teaching the art of colour. This included time at Macmillan in Covent Garden, Ora Salon in Soho and Propaganda Hair. It was while...

doing colour at big shows with Propaganda Hair that she met Pedro and Johnny who asked her to come on board at Ena where she remains three years on.

At Ena all stylists are trained using the Allilon school of hair cutting. Through them Christa has learned an entirely new way of cutting which she finds straight forward and to the point and sees results with a very high level of customer satisfaction. Throughout their training with Allilon, hairdressers at Ena learn to draw styles of cutting under the ethos that if it looks good on paper, it should look good on a person. Allilon is based at Ena and owned by Pedro and Johnny, who, with their team, are in demand as teachers all over the world.

It is Christa’s dream to take the Allilon way of teaching to New Zealand and introduce a whole new way of hairdressing to New Zealand salons when she moves back next year. She would love to find a business partner who can join her in creating a New Zealand-based Allilon Academy.

Christa is driven by being able to make people look and feel good. In her words she “just loves being able to do that”. She feels that she has been lucky in that she finds it very easy to relate to her clientele and that the colleagues she is surrounded by have so much respect for each other. Being a kiwi has certainly helped her on that front. For Christa it is not just about cutting and colour techniques but the whole salon environment, where stylists relate to their customers and each other well.

Ena stocks Volcano Coffee, one of the companies that her sister is involved with. Ena also includes a beauty salon, and on the day we visited someone walked out with the most amazing eyebrows we’ve ever seen. The salon is like a home away from home with attention paid to every little detail in the Georgian townhouse (including a fantastic mural on the ceiling to look at while your hair is being washed).

Christa is very proud of what she does and feels that hairdressers need to have greater belief in what they do. She said that if you feel good then you pass that on to your clients who will feel good when they leave the salon.

Ena Salon can be found at 5 Great Queen Street, Holborn. New customers can claim a 20% discount when they book with Christa. For more information see http://www.enasalon.com/.