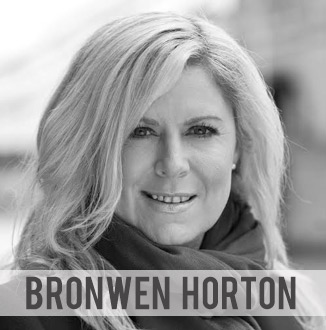 Which brought in over £3 million pounds in just three months. It was in 2013 that Bronwen was named New Zealander of the year for establishing this Network and her contribution to the NZ community.

With a background in banking working for ANZ both in NZ and upon arriving in London, Bronwen's timing couldn't have been worse, right in the midst of the economic crisis in 2007. Not one to idle, Bronwen took up a leadership course to further enhance her skills, whilst continuing with ANZ in private banking for expats. Realising that most of her connections through ANZ were women, and noticing a network didn't exist to connect these women, the idea of the network was born. Further fuelled by a love of learning and curiosity instilled by her parents who are both teachers.

"Bugger it I'm going to give it a go and try and connect these women and see where it goes. I'd worked hard to meet Kiwi women here in London and started to build relationships with them through ANZ. I believe in lasting relationships and I didn't want to lose these. I was also very interested in the businesses they had set up or the companies and corporations they work for. I was also very keen to connect these women to enhance and enrich their experience here in London"

Over the years this network has helped to forge new business partnerships, launch new projects through to career transitions all whilst remaining a very open community of women from the boardroom through to those just beginning in their careers. A particularly good example of the strength of this network is of a member that moved across to Qatar setting up a business that revolved around women in leadership. Through the network the former Prime Minister Helen Clark, was brought on board to come over and speak at a function.

Over the 8 years that Bronwen has been living in London, there have of course been many memorable moments. A particular highlight was attending the Queen's Garden Party which was probably the "poshest event" Bronwen has been to, that is run each year in the grounds of Buckingham Palace. Equally memorable but for entirely different reasons was the prayer vigil held at Westminster Cathedral for those that lost their lives in the devastating earthquake in Christchurch.

The entrepreneurial streak within New Zealanders has continued on the ground here in the UK, with many successful Kiwi run or led businesses which this network has always been keen to support and promote. Often what is difficult is not in the idea itself but in putting that idea into action and making it happen. So how did Bronwen take an idea and turn this into the network it is today?

1. Firstly, there are some important personal qualities which need to be present.
"It takes resilience and a total belief in the bigger picture – particularly when the going gets tough."

2. There must be a meaning or purpose. The NZBWN main aims are to learn, connect and inspire.
"We rely heavily on volunteers and the value of giving back is crucial to the sustainability of the Network. We are very grateful that so many of the women in our Network believe in it's purpose."

3. Take small steps but whatever you do ensure you take action.
"I used to be a real perfectionist and would research and analyse an idea before progressing with it. Setting up the Network took me out of my comfort zone."

4.Surround yourself with people who believe in your vision and are likeminded.
"This is one of the reasons I set up our monthly Monday meet up with the Network. I always find it reenergizing and I come away buzzing."

5. The final ingredient essential to making things happen is people and support.
"There are very few projects which can happen by one individual. When I set up the Network I relied heavily on women in the Network who had done this before and the expertise of those who knew what they were doing. Also I was very lucky to have the support of my husband who has backed me all the way."

It is phenomenal what can be achieved when you put your mind to it, and often being short on time is a number one reason for not forging ahead with an idea. Bronwen from the start of launching this network has always had a full time job to juggle as well, working currently as a project manager within the banking industry, with plans to move back into client advisory roles within private banking. In addition, looking into obtaining a board position combining her corporate experience and lessons gained from running this network and applying this to companies.

Bronwen's vision for the future of the NZBWN is of course bright, looking to take this network into the next phase as a social enterprise, whilst personally taking on a half marathon in October this year.

With a life as busy as this it serves as a great reminder to us that in the words of Bronwen, as Kiwis we have exceptional qualities which put us in a good position to make things happen.

So when opportunity knocks go ahead and make it happen.