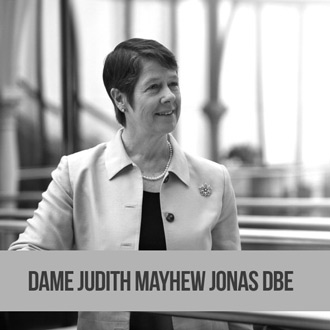 Dame Judith Mayhew Jonas says home is wherever she is, so it is easy to understand that both the United Kingdom and New Zealand hold special places in her heart.

Dame Judith is originally from Dunedin, having attended Otago Girl’s High School and the University of Otago before moving to the UK in 1973. She has been living in London now for 42 years and is currently working as a Special Adviser at Tishman Speyer, a commercial real estate company.

Dame Judith was the founder and Chair of London & Partners, having been asked by Mayor Boris Johnson to advise on the project and Chair of the New West End Company.

Previously a City lawyer, she was the Leader of the City of London Corporation for six years and was on the main board of Merrill Lynch and the Wealth Management Advisory Committee at Barclays Private Bank. She was deputy Chair of the London Development Agency and was on the board of London First and London First Centre.

With a passion for the arts she has served on and chaired numerous arts and educational institutions including being the first woman to chair The Royal Opera House. She currently chairs the Regeneration Committee of The Imperial Museum.

With an impressive CV of former and current board member roles and numerous other commitments it is easy to see why Dame Judith is considered one of the most highly regarded Kiwi women in London. This is only highlighted by her acceptance of a Dame Commander of the Order of the British Empire title for services to the City of London in 2002.

As numerous and impressive as her achievements and commitments have been, none of these were the initial reason Dame Judith bought her plane ticket 42 years ago.

“I decided at the age of six I was going to dance on the stage at Covent Garden. I never imagined I would end up as the first woman chairman of The Royal Opera House [instead].”

She is highly regarded in London but her links with New Zealand remain strong with roles as the Trustee of the Christchurch Earthquake Trust and as an active member of KEA. However, for now at least, she will remain in the UK with plenty of work to keep her busy.

“I love being in the middle of London with all its cultural institutions and the vibrancy of all aspects of life that you find here. I have just completed chairing the first phase of the redevelopment of The Imperial War Museum and we are about to start phase two. It would be hard to leave while there are so many exciting projects to undertake.”

She is incredibly supportive of the New Zealand Business Women’s Network and has been a role model and guest speaker on a number of occasions.

“I think that a network focused on women who work outside the home is essential for ex-pats. We are able to share experiences and knowledge of working in the UK at the same time as making friends and being supportive. The most important reason is that it is great fun and very energising.”

She is an amazing example of a very senior Kiwi woman using her influence to make a positive change in London. She hasn't lost her Kiwi approach and is still working very practically and championing the belief that you should learn the system and then find ways to bring in change.

Dame Judith Mayhew Jonas has previously won a New Zealander of the Year Award in the United Kingdom as well as a World Class New Zealander Award.