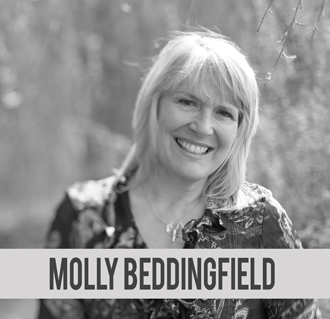 However, Molly’s charity was to challenge the traditional model, by investing 100% of public donations into charitable initiatives with operating costs being met by individual benefactors or donor companies. This pioneering new approach, known to the public as the 100% Promise, was to inspire the charity community to be more transparent with how donations were apportioned and in turn counteract widespread public disillusionment with the sector.

Mother to singers Natasha and Daniel Bedingfield, Molly sought their support to launch her charity, with her infectious enthusiasm soon garnering a following from the public and commercial organisations alike, with Coutts Bank, Hard Rock Café, Virgin and Reuters donating much needed event space, flights, marketing and branding. Celebrities such as Joss Stone and Bear Grylls also endorsed the charity, with the latter undertaking a world record challenge to raise $1 million to fund projects in Africa, and in the process becoming a Global Angels Ambassador.

Molly’s projects have been diverse and far-reaching, ranging from providing over 1.5 million school meals for 5,000 children in Africa, Asia and Costa Rica, to building primary and secondary schools Kenya, Sierra Leone and Uganda which have educated over 2,400 children, and providing safe drinking water to over 100,000 people in Africa and Asia. One of her most recent and perhaps that closest to her heart, has been providing 0% micro-loans to women in Kenya, as many women are forced to take out crippling loans with 20-35% interest when their crops fail due to lack of rainfall or even to buy their first solar light.

Despite very little support from bankers and businessmen in the loan sector who felt it was impossible, Molly has sought to challenge and transform this unjust system by providing women with 6-12 months payment free income-based loans, along with the resources such as brick making machines, to help them achieve this. By making 800 bricks a day from earth and concrete, Mama Mercy (a community elder) in Kenya has built rental properties and now lends to other women in her network for free to develop and upgrade their properties. She is now supporting 20 small chicken farms, 6 tailoring businesses and a large scale horticulture project. Still searching for a long term solution, Molly is working in conjunction with the UK Trade and Investment to encourage the technology and banking industry to design a new low interest loan model suitable for women in these types of communities to be called Global Angel Funding.

Why does she love NZBWN? –she says “because through the network I have met some of the most dynamic ladies in London who have become  lose friends, colleagues and Angels in helping me build my international charity work. ”

Currently dividing her time between Los Angeles and London, Molly continues to seek out new opportunities closer to home. This time she is focusing on the establishment of “Smart models for the European baby boomer generation, which would provide resources to this aging population to enable to live in their own homes rather than institutions. Although only a fledgling concept at this stage, Molly is looking to gather leaders in healthcare and technology to form a “brains trust” to move the project forward, and is passionate about creating a legacy that will continue to change and transform destinies far into the future.

For more information on Global Angels, please go to: