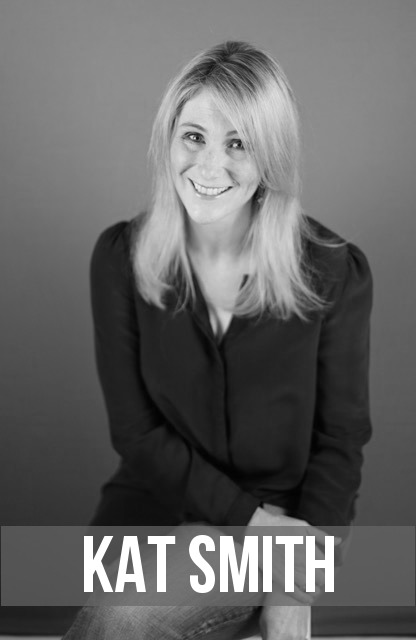 Like most children, Kat Smith dreamed up many different paths her life and career might take her, including becoming a photographer, a Nancy Drew style spy and a vet (although this last dream was quickly put to rest when her dad pointed out “but you cry when cats are hurt”). Never in her most outrageous daydreams could she have predicted the course her career would take; from community psychologist, to travel agent, hair salon owner, author and ‘Queen Bitch of Everything.’

After studying psychology and zoology at Massey University, Kat spent 7 years working with a community organisation supporting people with schizophrenia. A ‘normal day at the office’ could range from helping someone out with their weekly grocery shop, to bailing someone out of jail after they’d smashed a shop window believing the mannequins were out to get them. On one occasion, even serving a trespass notice to a convicted murderer, and then being told-off by his mum!

Nearing their 30’s, Kat and her husband decided it was time for an adventure, and being half British, London was the natural choice for Kat. A new city and a new career as a corporate travel agent turned an OE into a 13 year stay. By the time Kat went on maternity leave with their daughter, she oversaw seven different teams and managed 35 people. But, when it came to returning to her role, the work hard, play hard lifestyle had lost its appeal and she wanted her career to take a backseat while she focused on her new role of being a mother.

By the time her daughter was 8 months old, Kat felt the call of a new challenge. Terry Wilson, a hairdresser friend approached her about buying a salon in Notting Hill, proposing a business partnership where he’d be the brawn, and she’d provide the brains. The sought-after location, along with the idea of flexible hours and the ability to work from home caught her interest, and it seemed that the roles of motherhood and business owner could fit well together, although she’ll freely admit that the reality was a little different.

Kat and Terry stripped the salon, refurbishing it, re-staffing it, rebranding it and attracting a new type of clientele. The struggling salon managed to break even in year one, and turn a profit in year two. Seven years on, its value had increased sevenfold. Hair Organics Notting Hill became London's leading organic hair colour salon under Kat’s leadership.

Working from home during nap times and evenings, plus in the salon when her daughter was in nursery allowed Kat to become familiar with every aspect of the business and develop tactics for generating client leads. It was these skills she would carry into her next role as ‘Queen Bitch of Everything.’

Three years ago, Kat and her husband decided it was time for a new challenge, so they moved to the Middle East. Kat continued to manage Hair Organics from their new home in Doha, Qatar for 2 years, before deciding to sell her share of the business and focus her attention on her new venture and her writing.

As the newly crowned ‘Queen Bitch of Everything’ at Kat Smith Success Systems, she offers frank advice to salon owners from around the world, helping them improve their marketing, find better clients and grow their businesses. By her own admission, she takes no prisoners and will tell you exactly what she thinks.

“I’m not here to tell fairy stories, or sell hope - if you’re not doing something to a high standard then you shouldn’t be doing it at all.”

Kat’s advice to members of the network is “do what others aren’t prepared to do, then you’ll get the results others don’t get.” Advice she lives her own life by. The past two summers where the temperature in Doha reaches over 50 degrees, most other expats head home to escape the heat. Kat decided it would be an ideal time to close herself up at home and write some books!

101 Naked Confessions of a Gay Hairdresser: Quick, Dirty and Uncensored Secrets to Perfect Hair from the World’s Most Outrageous Hairdresser was co-authored with Terry Wilson, her former business partner from Hair Organics for the express purpose of bringing new clients into the salon. Grow Your Salon Fast: The Quick, Dirty and Uncensored Secrets to Effortless High-Street Domination Despite Cut-Throat Competitors, Insane Regulation and Obnoxious Clients was written to help salon owners with marketing strategies, determining ideal clients, deciding pricing structures and advertising.

And the name? Finding herself at the centre of a salon full of self-confessed queens (of both the drag and drama varieties), Kat became known as ‘the Queen Bitch of Everything.’ She was the go-to lady who solved problems and spoke her mind; qualities she now uses to shake up the salon owners in her membership programme.