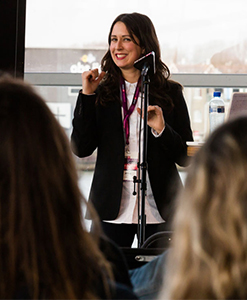 It was at this point, Jessie experienced a moment she describes as serendipity. She came across US company, Topspin Media, that was building ecommerce software for musicians to grow and sell to their fan base. They were setting up in London and happened to have a meet-up lined up in Carnaby St the following week. Jessie went along and immediately wanted to get involved. “I was an intern there, a 30-year-old intern, but I just loved their product.”

After working for them through her own limited company for a few years, it was a natural progression for Jessie to set up her own company, Wicksteed Works, in 2010. “I was supported to set up as a partner agency, as part of an ecosystem who could help artists use the software I’d come to know so well,” she says.

In subsequent years, she has learned the ropes on many ecommerce systems, and has worked on campaigns for some huge artists throughout her career, from Paul McCartney to Mumford & Sons, from Noel Gallagher to Bic Runga.

“The album I’m most proud of working on is Laura Marling’s Semper Femina,” says Jessie. “I’d been a fan of hers prior, but never really delved into her full catalogue. That was a really special experience.”

While she still considers NZ home, this Whanganui girl put so much effort into setting up her life in London, she found that she just couldn’t leave after her two years as many friends did. “I couldn’t walk away so I guess staying was the path of least resistance. That’s obviously not true, but that’s how it felt.”

This year has proved to be a challenging time for everyone, especially for those working for themselves without the security of an employer but for Jessie, she believes it brings out strengths that you never knew you had. “When you go out on your own, you become more resilient to the ups and downs. It’s just about hanging in there, staying on track and trusting that something will come along, even when it seems most perilous,” she says. “You really have to have some grit.”

As well as being a volunteer with the NZBWN newsletter team this year, Jessie has been working on a guide to help clients with email marketing. She knows that while convincing artists to use email marketing is relatively easy, getting it started isn’t so simple.

“I guess I’m putting myself out of a job,” she laughs. “But I believe being generous with ones’ knowledge does come back to reward us.”