Ahead of International Women’s Day we caught up with Emma Keeling, who will the MC for our headline event on Monday 8 March. 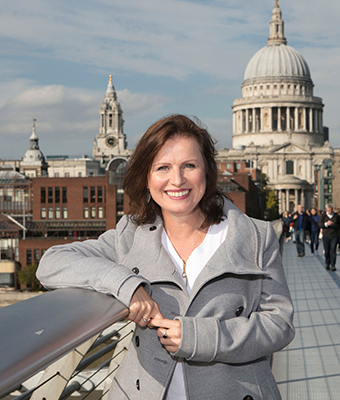 Whether it was fighting it out with the boys on the football pitch or fending off nay-sayers as the only woman in the newsroom, Emma Keeling has certainly had her fair share of challenges.

A journalist for 25 years, Emma started in radio and ended up in TV. She worked on a variety of news and current affairs shows in New Zealand before securing the Europe Correspondent role for TVNZ.

“I thought I knew what I was getting myself into but two years of terror attacks and Brexit soon made me realise I didn’t, but I had to just get on with it. Looking back, I feel proud of how I adapted and the stories I told.”

She feels “chuffed” to host the NZBWN International Women’s Day event with this year’s theme ‘Choose to Challenge’. So what has she found most challenging in her life? “To be honest keeping those little voices in my head quiet and getting out of my own way. Although men come a close second,” she says with a grin.

Emma was born in Auckland and grew up in Kerikeri. She wanted to play football but there was no girl’s team, so she played with the boys until her dad pulled her out when she hit puberty. “I was furious, but I ended up on the golf course caddying for him one day when I was bored and that’s when I started playing.”

Eventually she made the New Zealand junior team and that, plus her journalism degree, helped her get her first job as a producer on Radio Sport. Once again she was the only woman. “Most of the men I worked with were very supportive but there were times when others treated me as a token female or someone to hit on. There was a view that women only got into sports journalism to sleep with athletes. You certainly weren’t there because you loved sport or were good at your job and that view remains in some circles.”

At the time, Emma didn’t have the confidence to push back against her detractors or push herself further in her career. “I thought I had to know everything and be perfect. I look at the mentor system that the NZBWN runs and wish I’d had that when I started. Things have improved and sports editors are trying to hire women but it’s still not easy. I wrote a sports column for a while for Stuff and most of the comments were about me not having a clue. It can get nasty. I’d hate to think what Maori female journalists have to deal with and I think companies need to be more aware of how they can support people and bring about real change.”

After two years as the Europe Correspondent for TVNZ, Emma was mentally knackered. “I’d given everything and I was ready for a break away from the endless cycle of doom and gloom. So I decided to challenge myself to find work making documentaries, films, or perhaps presenting work, anything that wasn’t news. It was ambitious. I was 42 with few contacts and had been a news reporter, which production companies often view as being worse than having no experience.”

Which is why she unexpectedly found herself making long form science stories to showcase incredible scientists and their work. It’s kept her busy during lockdown but she’s not giving up on doing something that would shock those doubting voices in her head. “Challenges create opportunities and push you in directions you might not have considered otherwise. But you need support and belief, which is why I love these kiwi gatherings; you never know where that inspiration to take the next big step might come from.”