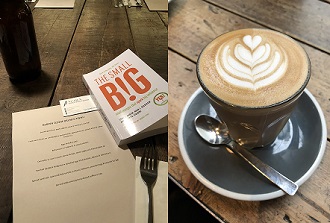 The Blurb on the back of the book says it all ...

At some point today you will have to influence or persuade someone to do something – your boss, a colleague, a customer, your spouse or even your children. In The Small B!G, three heavyweights from the world of persuasion science and practice describe the small changes that make the biggest difference in influencing other’s behaviour.

From the little adjustments that make meetings more effective to the costless alteration that saved a government millions – the Small B!G will provide more than fifty small and immediately applicable changes that can mean the difference between failure and success when persuading others. It is an indispensable guide for anyone who wishes to change the behaviour of others effectively, efficiently and ethically.

This book is broken down into 52 small chapters of 5-6 pages each so it was very easy to pick up and put down. Some of the chapters were based on how to persuade people to save better for their retirement, give more generously to causes and boost campaign efforts. There were insightful ‘small bigs’ that could help business with their online reviews and maintaining customer loyalty.

The ability to handle goods before buying them increased the uptake of products being sold. Having a higher ceiling increased people’s creativity and standing in the middle of a group and not the edges can save you being booted off the weakest link program.

Dressing in a style similar to the group you are trying to influence but at one level higher may give you the edge in getting that message across or job you are trying secure.

Sending an appropriate cartoon first before a negation email showed an increase of 15% greater commercial outcome.

Using Social Proof, a principle of human behaviour HMRC collected £560 million of the £650 million debt that was the focus of the pilot study, representing a clearance rate of 86 percent. The year before the clearance rate was only 57 percent. They added one sentence only to their standard letter and it led to a B!G change.

There is something for everyone in this book and with it being an easy read, why wouldn’t you implement some of these small changes, you never know they could spark a big influence for you also.