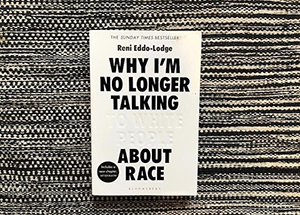 Until George Flyold’s death and the Black Lives Matter movement, I hadn’t heard of this book. When I first read the title, I was taken aback, which of course is the point. Its deliberately provocative. Reni wants you to sit up, take note and listen. She’s a journalist and this is a great click bait title.

Reni talks about what initiated her original blog post (with the same title back in 2014) and led to the publication of this book. She then goes on to tackle a lot of crucial and complex topics: the history of slavery and racism in Britain, structural racism, white privilege, the feminism question, how race and class are intertwined, and offers advice on what white people can do to fight racism.

This book is well-written and easy to read. Having said that, it took me a while to read. Because it elicited a very emotional response from me. This is Reni’s perspective and its steeped in emotion. It made me tear up, it made me angry. It made me sad. It made me frustrated. It made me hopeful.

As the only person of colour (POC) during the book club, I found it insightful to hear what resonated with other members. The large majority had a similar emotional response and two topics jumped out for most people: feminism and class. Being women, we inherently internalise the first and are increasingly aware of the latter, especially in the UK where class can determine your life’s course. We also discussed racism in NZ – does it exist? Is it the same?

Similarly, to the author, I have come across people who say “I don’t see colour” and the ‘some of my best friends are Black’ defence. To the first, I would say it means you don’t see me. For the latter, our book club’s version was someone saying, “my cousins are Maori” – said multiple times to emphasize that they didn’t see racism in NZ. I will counter that by quoting John Eligon of the New York Times: “it’s a myth that proximity to blackness immunizes white people from doing [or believing] racist things.” New Zealand is not immune to racism. It exists everywhere. Simple example: my Chinese-Asian friend – a fourth generation Kiwi frequently gets asked “where are you from?”, whilst my best friend - with a Dutch passport has seldom, if ever, been asked that question.

One of our members suggested, we ask: “How has my white privilege impacted me this week?” It’s a good question for reflecting on the inherent privileges that come with being white and which simultaneously limit other non-white, non-male, non-cis-gendered, non-straight, non-disabled, non-wealthy people.

Because racism is sneaky, its structural, its political and it hurts people. It results in less products and services, wage gaps, missed promotions, lost job opportunities, under-representation in the media, film and publishing, less access to healthcare (and even where available less focused treatment and lower survival rates), and a higher number of deaths by unnatural causes.

How can you change the system? Reni suggests that there is no need to feel guilty for your privileges. She points out there is a difference between ignorance and malice. The book won’t help with malice (racists are unlikely to read it anyway). Read the book to understand what its like to be black in the UK. If nothing else, it will give you information to augment the predominately white viewpoint we get elsewhere.

We know these structures will not vanish overnight. This book will help you be more aware of them and try to deconstruct them and talk about them. Talking isn’t easy or comfortable either. It was a difficult topic to discuss during the book club. I’m impressed that our members were so open to talking and listening in equal measures.

“In the end, we will remember not the words of our enemies, but the silence of our friends” – Martin Luther King, Jr

It was the first time I have attended a NZBWN bookclub, and it was the book that brought me to it. In these times of heightened awareness about race, and many discussions on the topic, I thought, that living in the UK, it was time to read a book about UK racism. We had around ten attendees, which happened to all be Kiwi women who’d lived in the UK for some time. The bookclub was a chance for each of us to explore our views on racism – and a lot of the discussion was about how we experienced racism in New Zealand and in the UK.

Eddo-Lodge’s book starts with a brief outline of racial history in the UK – another reference for this is Akala’s presentation to the Oxford Union. This clearly demonstrates how ‘…racism does not erupt from nothing, rather it is embedded in British society. It is in the very core of how the state is set up. It’s not external. It’s in the system.’

Eddo-Lodge, like Robin DiAngelo in ‘White Fragility,’ differentiates between personal racism and structural racism. As a white woman, I find this difference helpful. It allows me to see that I am part of systemic, or structural, racismwithout being labelled as ‘good’ or ‘bad’.

Eddo-Lodge examines the system and then tackles the more personal matter of white privilege. In our bookclub discussion, there was plenty of acknowledgement of white privilege and confusion around how it shows up in our lives. I suggested that the question be narrowed to, ‘How did we experience white privilege in the last week?’ and gave an example of how, as a white, educated, middle-aged woman, my white privilege allows me to have experiences that may be different for many others.

The author outlines how, ‘Racism’s legacy does not exist without purpose. It brings with it not just a disempowerment for those affected by it, but an empowerment for those who are not. That is white privilege. Racism bolsters white people’s life chances. It affords an unearned power; it is designed to maintain a quiet dominance. Why don’t white people think they have a racial identity?’  In the bookclub, we discussed our racial identity – especially in a New Zealand context and how things worked in the UK.

Eddo-Lodge defines structural racism as ‘… dozens or hundreds, or thousands of people with the same biases joining together to make up one organisation, and acting accordingly.’ It is an impenetrably white workplace culture. ‘Structural (author’s emphasis) is often the only way to capture what goes unnoticed – the silently raised eyebrows, the implicit biases, snap judgements made on perceptions of competency.’ She says this is covert racism that ‘… lies in an apologetic smile while explaining to an unlucky soul that they didn’t get the job. It manifests itself in the flick of a wrist that tosses a CV in the bin because the applicant has a foreign-sounding name.’

The biggest takeaway I have from reading this book, and the discussion at the bookclub, is the learning that as a white person, I need to be able to accept the criticism that I may receive, or the ignorance that I may feel, when my white privilege is challenged. One way of challenging my unconscious biases is to know that my second thought is the most important one; I mean my first thought, which is to be defensive and claim that I’m not racist or behaving in a racist matter, needs to be tossed away. The second, split-second-later thought, is to thank the person who has pointed out my privilege in the moment, accept what they say, take it away and think about it.

The final words belong to Reni Eddo-Lodge: ‘If you are disgusted by what you see, and if you feel the fire coursing through your veins, then it’s up to you. You don’t have to be the leader of a global movement or a household name. It can be as small scale as chipping away at the warped power relations in your workplace. It can be passing on knowledge and skills to those who wouldn’t access them otherwise. It can be creative. It can be informal. It can be your job. It doesn’t matter what it is, as long as you’re doing something.’

Veronica Lysaght has a background as a senior leader with extensive international management experience in government and the third sector. As Strategic Regional Director for the International CoachFederation, she instigated a coaching culture in her remote-working team based around Europe, the Middle East and Africa (EMEA). Veronica holds a Bachelor of Commerce and Management, a Masters of Counsellingas well as being an experienced and certified (ICF and integral) coach. She is passionate about justice and equity and has designed a programme called, Leading with Humanity, to inspire those leading for good to excel at what they do.

If you wish to be in touch, please contact her at
veronica@leadingwithhumanity.org