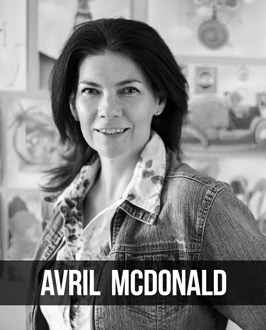 “My dear Wolfgang,” said Spider,
“if only you knew:
There’s a powerful magic
that’s deep inside you.

So if something is scary,
or cruel or unkind,
You can change how you feel
with your magical mind.

Excerpt from The Wolf and the Shadow Monster by Avril McDonald

Avril McDonald is passionate about mental health and believes that children should be taught how to manage tough emotions, phobias and neurological patterns early on, after fighting her own battles with anxiety since her early childhood.

Out of this was born “Feel Brave”, an educational programme featuring a series of five books, associated teaching guides, and a charitable arm (www.friendsoffeelbrave.com/) which offers schools, private and public organisations the chance to gift the programme to another school of their choice anywhere in the world.

Aimed at 4-7 year olds, the "Feel Brave" books (www.feelbrave.com/) are told through the eyes of Wolfgang, a warm and kind hearted wolf, and seek to unconsciously educate children as to how to cope with emotions ranging from worries and fears to grief and loss. Although Wolfgang and his furry friends are not modelled on particular people, Avril felt it was important that the central character was male as she wanted to create an inspiring role model for boys who are not often the focus of stories promoting emotional development.

During her 6 year journey to get the "Feel Brave" books published, Avril had many moments of self-doubt, but she is a great believer in positivity and persistence. Despite initial scepticism from her husband who could not visualise the characters or their translation into books, Avril self-funded the project so that she could retain creative control. However, this forced her to maintain a lean business model so she produced her own website, web-shop and video content, using skills acquired from previous roles and internet tutorials.

A ferocious networker, Avril has also used her connections to full effect by securing mentoring sessions with Robert Saxton, a published poet, and Annabel Karmel, a parenting author and entrepreneur, whose recommendation to attend the London Book Fair was invaluable in assisting her to source Crown House, who offered her a publishing deal in 2015.

Over the last year whilst promoting the launch of the books in the UK, Avril has presented "Feel Brave" to over 3000 children in 10 schools, ranging from low decile to private institutions. Feedback from children and teachers alike has been overwhelmingly positive, as currently many school curriculums lack engaging and innovative social and emotional health resources.

Avril has also been steadily building her profile by garnering coverage through global press and media, with a recent podcast interview for Kathy and Mo (kathyandmo.com/episode040/), and the filming and airing of her visits to St John's Church of England School and St Paul’s Cray School by TV3’s ‘Newshub’ and TV1’s Breakfast Show (www.feelbrave.com/#!press-/c1zhj ).

As children's mental health issues continue to rise there is a very real need for programs such as "Feel Brave" to become a reality and to give all children the ability and tools to deal with tough emotions and achieve their future potential in a world that is becoming increasingly more distracted, stressful and complex. This is why moving forwards Avril would like to build “Feel Brave” into a commercially sustainable global mainstream programme for schools, with interest already coming from both the US and New Zealand. Further picture books and an animated series could also be in the pipeline. but for the meantime she feels she is "auditioning to the world for the role of a lifetime".