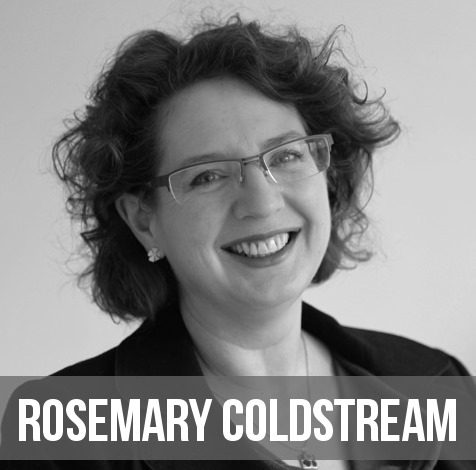 Rosemary Coldstream’s husband thought her timing was seriously off. She had decided to make a change from a long career in fashion to landscape design at a time when the TV programme ‘Ground Force’ had brought garden design into popular consciousness and new landscape designers were popping up all over. Lovingly he told her, “You’ll never make it.”

Presumably he has since eaten his words as Rosemary has gone on to design award-winning gardens, including a delightful trade stand for the Chelsea Flower Show which featured a Morris Minor set in a lush 1950s picnic scene, as well as receiving a prestigious Society of Garden Designers’ award (‘the BAFTAs of garden design awards’). When not developing high end garden plans for a range of clients, Rosemary also writes and lectures on garden design.

Rosemary was born in Christchurch, but her family moved to Auckland when she was 12 and she had her secondary education at Selwyn College. After a stint at the New Zealand College of Fashion Design, she took up her first job in the wardrobe department of the Mercury Theatre. In 1985 she worked for Colin Cole’s couture fashion company in Parnell before becoming a pattern cutter for Miss Deb making high street fashion for young kiwi women.

After arriving in England in 1990, Rosemary had the obligatory stint behind a bar in a Carnaby Street pub before continuing her pattern of alternating between couture design and the high street. A job at a Maida Vale couturier saw her designing for clients ranging from Hasidic Jews to princesses of Bahrain. While her next position, as a pattern maker for Lagenes in Camden was all about working on fashion for Top Shop, Dorothy Perkins and Etam.

But Rosemary felt something was lacking. “I wasn’t being creative enough. Instead I was just churning out a version of someone else’s stuff and not achieving what I wanted to do.”

After marrying an Englishman and having her first daughter, Rosemary made couture wedding dresses and suits from home but a second daughter, and a move from London to St Albans prompted a change in career. In spite of her husband’s misgivings, she enrolled in a garden design course at further education college Capel Manor in Enfield and - hitting the ground running – set up her own company before she had even completed the course.

Starting as a freelancer, she began to network and build her own client base including a Russian oligarch who was taken with her work after seeing her stand at the Chelsea Flower Show.

In 2009 Rosemary became a Registered Member of the Society of Garden Designers, the professional association for UK garden designers. 2012 saw her creating the 1950s picnic style Chelsea Flower Show trade stand – which won her a Certificate of Merit – and in 2015 she won the Society of Garden Designers’ 2014 Pocket Garden Award for a wonderful river garden design (check out the photos on Rosemary’s website and do look out for the NZ native bird cushions).

While things were going well with Rosemary’s business, she had a real shock on the health front when she discovered she had ovarian cancer while working on a Chelsea Flower Show garden. Rosemary has since made a full recovery, but says that picking up her Design Excellence award from BALI, the British Association of Landscape Industries, while wearing a wig just after her fifth cycle of chemotherapy was a somewhat surreal experience. However she says that it was important for her to keep working during her treatment as a way of keeping her own sanity.

And what do her clients want? “A lot of my clients don’t want a garden that requires work. They want a peaceful space to be in which is a neat and tidy extension of their house. So I give them clipped hedging and a garden which is quite formal and non-naturalistic.

“People with country gardens often want something softer. I’ve moved to planting a mix of perennials and shrubs and I often use good New Zealand shrubs. Flaxes have had their moment but I use pittosporum and hebes which are a good replacement for box.”

Rosemary believes everyone should be growing plants, even if it’s just a few herbs in a window box as “it gives some meaning to life and so much pleasure.” Even with so much garden design in her life, she still has time to enjoy her own garden where her husband is allowed to do some mowing and pruning (“but only under my instruction”).

Currently Rosemary has three large projects coming to an end, including the refurbishing of a 12-acre garden, and she’s looking forward to creating another river garden, which will provide a number of ecological challenges. But she always has a soft spot for the Chelsea Flower Show: “It’s theatre for gardens and complete madness. You work from 8am to 8pm and there’s no rest but it is great fun. It’s very intense but there’s huge camaraderie” and would love to design a competitive garden next year or in 2019.