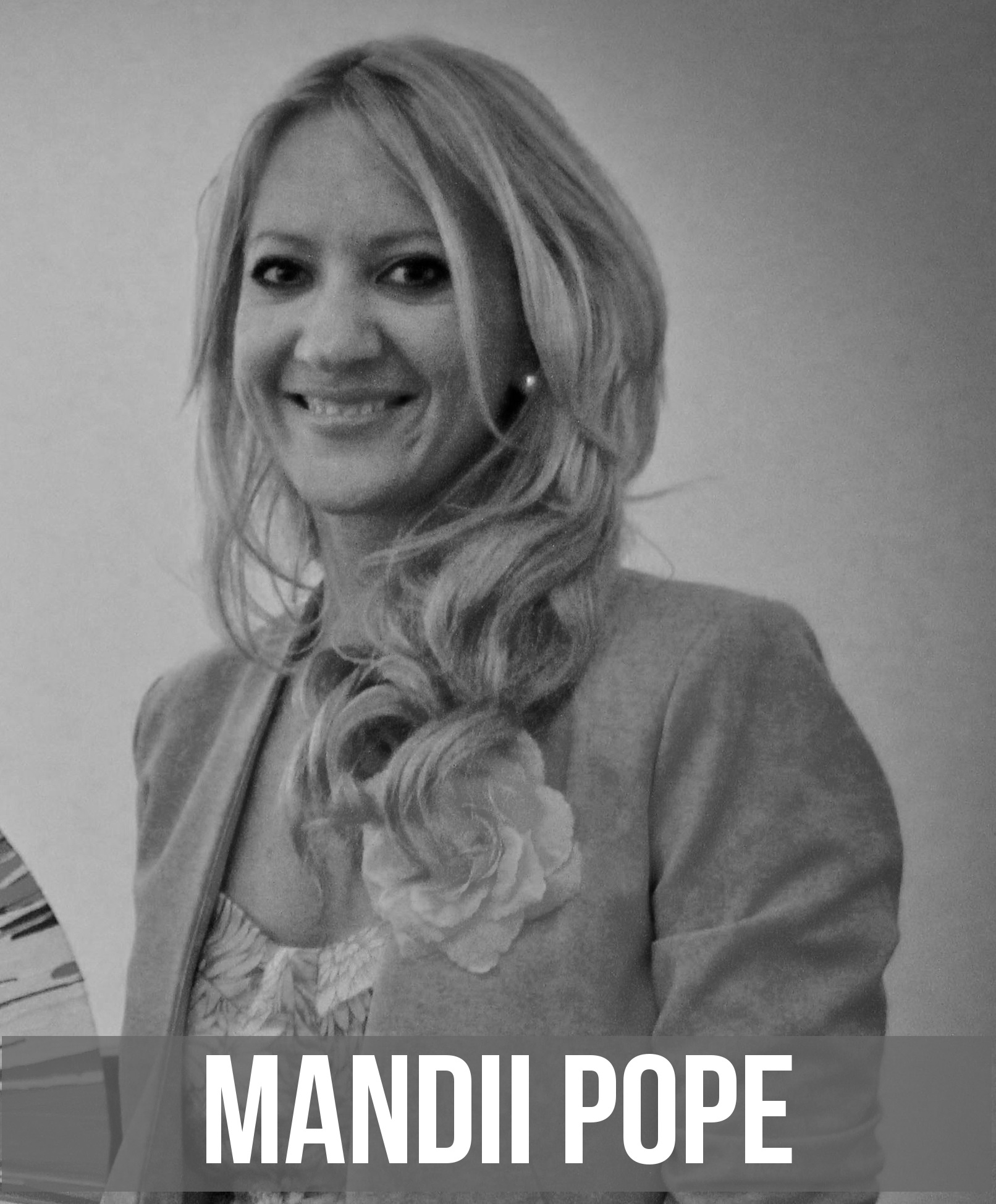 If you’ve ever thought that artists are vague, creative, head-in-the-clouds types, a half hour with Mandii Pope would certainly shatter that stereotype. She may be one of New Zealand’s most prolific commercial artists but she’s also got a business nous and tech-savvy side to her that would put many MBA graduates to shame.

Today she mixes corporate consultancy with art projects and has raised over £100,000 for charities – a goal inspired by the example of philanthropist Sir Owen Glenn who sponsored a solo show in Dubai and her first UK exhibition in 2011, a break-through event in a prestigious Cork Street gallery. She reached her fundraising goal through a series of charity auctions over five years – the period she had allowed herself in which to achieve that figure.

Mandii has always been pragmatic and goal-oriented, right from when, in 1995, she chose the fledging arts course at Manukau Polytechnic over the more established courses she’d been accepted by in central Auckland because she was concerned her little old Austin wouldn’t cope with the daily trip to town whereas Manukau was just ten minutes from home.

For her parents, her art was only ever a hobby and her father wanted her to be a doctor or lawyer (even if he did build her a studio in his warehouse) but Mandii was determined to find a way to be an artist. In true tortured artist fashion, it didn’t happen overnight, and in fact she temporarily strayed from that path only to return to it many years later in the UK. Those intervening years saw her enter the corporate world, which, as she is the first to say, have proved invaluable and in fact have helped her to hone and define her artistic endeavours as well as enabling her to turn what could have been a mere hobby into a commercial proposition.

At age 19 a chance encounter at the Big Day Out where she ended up talking to a television ad director proved the first step along the business road. After regaling him with her dreams to be in a creative sector, he suggested she came on set the following day, essentially as a “lackey”. One thing led to another and she started to draw up storyboards for him and shortly thereafter made the decision to drop out of her course and try to make it in the real world, or as she described it “seize the day”. She grabbed the opportunity with both hands and even though it wasn’t a full time position, managed to supplement it by working weekends in the paint department at Levene’s.

Another chance meeting at a family wedding in Rarotonga presented the next step. She got chatting to a fellow guest who was the director of a telecoms company and he offered her a job in telemarketing. The money was decent and she’d have her weekends back. With her father’s words about having something to fall back on if art didn’t pan out ringing in her ears she donned a headset. And hated it. What doesn’t kill you makes you stronger, and she progressed to doing PDAX system training which was in high demand back in the mid-90s. It soon dawned on her that the system guides were extremely difficult to follow so she approached management with a proposal to completely redo them in graphic form so that they became user-friendly. Learning all the “techie jargon” and transforming it into a client-oriented solution gave her confidence in the corporate world and showed her that she could hold her own.

After a highly successful stint working on the sales team for the property section of the New Zealand Herald, her pragmatic side took a temporary back seat when she made an impulsive decision to move to London with her partner who had been charged with launching the 42 Below vodka brand in the UK. She essentially landed at Heathrow and walked into a fantastic apartment in Knightsbridge and a great job in sales and marketing. All so easy. Too easy. The job didn’t work out, the relationship ended and suddenly she found herself homeless and working in a low-paid production job by day and a Soho bar by night. Again, what doesn’t kill you makes you stronger and on the verge of packing the great London experience in and returning home, a chance meeting (serendipity is a recurring theme in Mandii’s story) led to a decent flat and a job in the city as a receptionist at a company dealing in serviced office space. In true Mandii fashion that job turned into a role as Sales & Marketing manager and also opened the door for her to provide art for corporate clients .
She now had a home and a job and that reassurance freed up her head space to return to art and start refocusing on that. Over five years she built up a portfolio from scratch, building her website, attending art fairs all over Europe and essentially laying the foundations for her art career. The following five years was when it all started to pay off, starting with the Cork Street exhibition sponsored by Owen Glenn where 230 of her pieces went on show.

Since then she has become a “go to” name for both private and corporate commissions, with her live painting session in which the Duchess of Cornwall added her own brushstrokes to Mandii’s picture of Clarence House a standout memory, followed closely by painting the UK New Zealander of the Year portrait. Her work spans an eclectic range from emotive spin paintings, pop art portraits and cityscapes to vibrant public space installations including (but most definitely not limited to) a bus painted like Buckingham Palace, a 15-foot Big Ben-shaped phone box in Trafalgar Square, giant gnomes in Hampton Court Palace gardens and oversize Triceratops rhinos at Paignton Zoo.

She is currently in the throes of setting up a contemporary art gallery in West Sussex which will have an online gallery and pop-up venues in London. It will focus on emerging artists with the particular aim of supporting New Zealanders trying to make it in the art world.

If you ask Mandii what advice she would give to aspiring artists her response would be given in her typical passionate and direct way: “Make the most of the opportunities that present themselves even if they seem totally random. Embrace them wholeheartedly. You just never know where they will take you. Yes, a straight path is ideal but a zig zag never hurt anyone. You just need to believe in the famous carpe diem so you never have to end up thinking ‘what if?’ Oh, and learn some business skills!”

Mandii is available for private and corporate commissions and can be contacted at info@mandiipope.com.