What could be simpler than designing a handbag? Any six year-old with a few felt pens could do it. But designing the perfect boardroom handbag that doubles as a backpack, using the finest leather, made by the best craftsmen that catches the eye of the world’s fashion media? Ahhhh, now that takes creativity, innovation and one determined Kiwi, as it turns out. 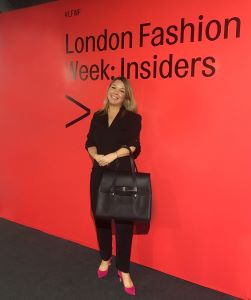 To understand how Jacqui Gilbert operates, you only have to listen to her reason for leaving Telecom in her 20’s. “It didn’t capture my imagination and I love working for things that make me dream.” She finishes this sentence with what sounds like a self-conscious laugh but it doesn’t sound silly to me and it explains a life lived with passion and curiosity.

A Wellingtonian, who majored in psychology and political science at Canterbury University, Jacqui worked for a few years but “I’d always wanted to do an MBA somewhere because I really wanted to have the chance to see how I stood against the rest of the world.” She was drawn to Cambridge in England because...you guessed it, “I loved the innovation and the history.” That was 2013 when she was 31.

Her ‘sliding door’ moment came at a job interview. She had a long way to travel and needed to carry a laptop, water bottle and heels. She took a backpack, which caught the disapproving eye of management. It didn’t stop her getting the job but it did start her on a search for “a bag that had functionality and credibility and there was nothing in the market that could do both.” Designing this elusive bag became her MBA project and evolved into the company C1209.

What she didn’t realise was how many years it would take to achieve.
“I didn’t appreciate the creative process and design process and how hard it is to be original and fresh. And to create something no one else has done before is very hard.”
She started with a team of MBA colleagues but they didn’t last. Instead sport supplied the determined people she needed. She met her co-founder Fran Brandon, who also happened to be the captain of her Blues Waterpolo team.

Fresh out of Cambridge they went looking for designers and got a kick in the guts. “They said it’s impossible, it’s a problem the industry’s being trying to solve for years. What you’re asking is for a design miracle, we’re not interested.”

So, they got stuck in themselves. An engineering friend from the MBA helped design the clasp that can attach in two ways and there was nothing on the market that could do that. “The big idea that we have since patented was the mechanism that allows the bag to convert seamlessly and discreetly from a handbag to a backpack whilst looking beautiful in both forms”.

What would separate them from the rest was innovation, quality and craftsmanship.
They saw a sample bag of a renowned (yet extremely private) U.K. freelance designer. They approached her but had zero budget. “I was living in a one bed apartment with four of my friends. One was sleeping in the kitchen!” The fashion Gods were looking down on them when they met the designer at her house and Jacqui bonded with her dogs, securing her a dog sitting job during the designer’s visit to Paris Fashion week in exchange for sketches of their first bag. They went to Spain and found an older group of artisans pushed out by fast fashion. They’d never seen a design like it and agreed to make it, which was a validating moment. They called the bag The Franklin, after Cambridge Alumna Rosalind Franklin whose work led to our modern understanding of DNA.

The breakthrough was a serendipitous moment. A friend wearing the bag was waiting for an uber and was spotted by a Vogue writer. Eight weeks later they were told their bag had been listed as one of the best bags to see you through the working week. Unsure if they should send the woman one of their bags, their naivety became a godsend. They wrote and asked, ‘’Just because we’re new to this, should we send you a bag? What should we do next?” She suggested sending a bag to the wardrobe department and The Franklin ended up on Vogue’s Global It-bag Index which “puts us in the top 40 bag designs in all different categories that Vogue has endorsed so that’s really exciting for us.” With fame came feedback and in October they’re launching pre-orders for six smaller bags made of two different leather textures in three colours, with secret backpack functionality.

Jacqui has managed to break-even but the company is not self-sufficient, yet. She still needs to work by day so she and Fran can work on the bags by night. And she constantly has to arm wrestle with the business world, still geared towards doing deals with men. “Honestly, I never thought of myself as a feminist and now I’m a raging feminist!”

It’s been hard, and taken years but Jacqui realises that she and her team have achieved something unique in an industry one magazine said had ‘lost its ability to innovate. “Vogue was the real highlight because it was a world authority saying we’ made something beautiful and different. So that was a real wow moment. Some designers spend their whole careers and don’t get into Vogue.”