As the only one at her all-girls school, in 1979 New Zealand, who wanted to do code, Melissa Clark-Reynolds, was bussed to a boys’ school to learn, because of course it was only a class for boys. 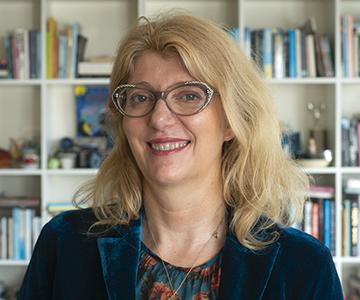 Back then there were no computers in schools and each week the class would write their code and send it Wellington, and a week later a note would arrive back to say if the code worked or not.

Fast forward to 2020 and Melissa is now an accomplished futurist – in other words, she looks for patterns that other people can’t see to help predict what may happen in the future.

“That’s my super power. It’s more about culture anthropology with maths behind it, so a focus on people with an added focus on data.”

After attending a workshop at Stanford University about the future of food, she trained with The Institute for the Future as a foresight practitioner.

Melissa is no stranger to our network, having been a member for the past decade, she has spoken at events previously and shared her insight. She’ll be bringing her experience to our network and sharing insights to help us think about the signals we see every day. While we may not all have the education and experience, Melissa says curiosity is the number one skill.

“Think about how you might be able to look around and see some patterns – see how things might change in your sector or world. Then think I wonder if that’s going to turn into something, such as I wonder if Harrods will survive in a digital world.

“The key is there’s no single solution, there will always be an and. There are no future facts. We have enough trouble with facts in the past.”

The implications of COVID-19 haven’t passed by Melissa either. Since mid-December last year she’s been looking at the implications on the food industry and how it would stand up to a pandemic, in particular thinking about how closures of restaurants and cruise ships would mean changing eating patterns and markets for NZ produce. The growth of online food ordering if people couldn’t leave their homes, was an obvious trend to spot, for example.

After 30 years in tech, running several companies, she was continually looking for the tools to do her job, such as really being able to see patterns to predict what may happen in the future. She says she doesn’t always get it right but that’s part of the challenge.

Her career has not been without hiccups and she says the best advice she’s taken is the Dr Suess’ quote “Those who mind don’t matter, and those who matter don’t mind.”

“We all have stuff ups. I featured in Forbes as one of the top tech founders in London and then I was broke a year later.”

Melissa didn’t let that stop her and she has continued to build an impressive CV and list of achievements. She was awarded the ONZM for Services to Technology in 2015. Melissa sits on the Boards of Jasmax Architects, is the first independent Director of Beef and Lamb NZ and chairs Little Yellow Bird (an ethical uniform company).

In recent years she has studied at MIT, Cambridge University and Stanford (twice!), as well as The Institute for the Future in Silicon Valley. As well as facilitating for the Institute of Directors Melissa works with companies to execute transformational strategies.

While her career has spanned many industries what really excites Melissa is regeneration, which ultimately will protect the health of people and the planet. She says that goes way beyond sustainability. “It’s really about how do we be a force for the good.”

“Sustainability is usually about how do we have a “less worse” impact, rather than looking at how we completely regenerate. What if we committed to healing the planet, communities etc? We need to ask how can we build buildings that regenerate communities, how do we farm so the soil is better and there is more biodiversity every day?”

After living in the UK, Vietnam and the US, Melissa is one of our many members who has found her way back home to New Zealand where she is working with a number of organisations – splitting her time between directorships and working directly with companies to help them see or shape the future.

Melissa tweets as @HoneyBeeGeek where you can find out more about what interests her. Sign up for our event here.