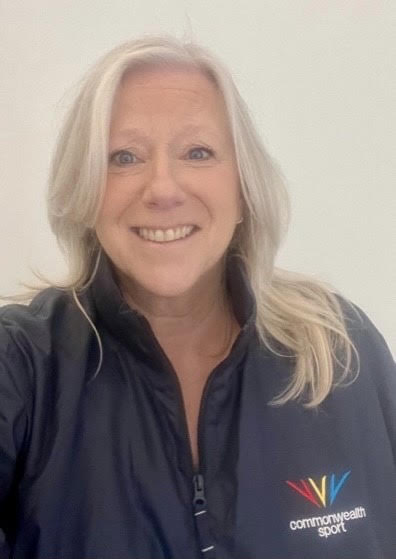 “It’s just so hot!” Attempting to avoid a summer heatwave on her drive up to Birmingham, Katie Sadleir is bubbling with excitement. Just days before the opening of the Games, Katie, the CEO of the Commonwealth Games Federation, is busy reviewing Covid practices for late entry arrivals and preparatory workshops for para athletes, as well as overseeing the launch of the Commonwealth Pride House, and with the Commonwealth Sports Ministers’ conference. It is clear she is firmly invested in her organisation’s strapline ‘Sport is just the beginning’.

“I mean, it's central and its core and it's our reason to be. But it's what happens as a result of those conversations in sport - the trade programmes, the huge legacy stuff… that whole series of significant stakeholder opportunities that wrap around making the most of the Games in terms of forging relationships beyond this period”, she says. For Katie, the true buzz of the Commonwealth multi-sport environment lies in what this “multicultural hothouse… does to actually grow people”.

An Olympian and a Commonwealth medallist herself (she won bronze for New Zealand in solo synchronised swimming at the 1986 Games), Katie’s stellar career could equally be described as ‘multi-sport’. In NZ, she held a range of leadership positions in national sport policy, including leading the establishment of the NZ Academy of Sport, holding numerous directorships in elite sport, and launching significant cultural and governance initiatives in Wellington. These contributions led to a Lifetime Achievement Award by Sport New Zealand in 2016, before she headed off overseas in her fifties on what she dubs her ‘Big Girl Adventure’ - shifting to Dublin with World Rugby to take on the role of global manager for the women’s game.

Katie had thought she might move back to New Zealand after the Women’s Rugby World Cup is held there this year, to the home she has kept on the Kapiti Coast. “But when this Commonwealth Games job came up, I just thought, how can I not put my name in the hat for this?” she says. Born in Scotland, growing up in Canada, with an Australian father, a South African grandfather and Irish roots, Katie moved to New Zealand at sixteen and has been at seven Commonwealth Games in various capacities, including as Assistant Chef de Mission for New Zealand at 1994 Games in Victoria BC, Canada, “so I call myself the Commonwealth Kid”, she says. In November 2021 she became the first woman to head the Commonwealth Games Federation.

Katie’s passion for blendinghigh performance sports with the creative arts and stakeholder communities has always drawn her to organisations that use sport for social change. She agrees that Covid has shaken us up to think in different ways about how we do things. While valuing its deep sporting traditions, her aim is to make the Commonwealth Games “attractive to hosts and fans in what is an ever-cluttering international sports market… making sure that we are relevant and relatable”, particularly to the large numbers of under-30s throughout the Commonwealth. She was a key driver in securing the regional hub format of the next Victoria Games in Australia, with other innovations including the establishment of an athlete advocacy framework which actively supports Commonwealth athletes to use their international profile to champion causes which are important to them. “I come from New Zealand, and we like to think creatively, and we certainly like to understand what great practice is, and not to copy it, but to actually take it the next step,” she says.

Her forward-thinking approach continues to draw strongly on New Zealand’s innovative talent base and the professional networks she developed there. She believes strongly in relationship-building, and has enjoyed connecting with the New Zealand Business Women’s Network in London. For those looking at a move to the UK, Katie advises not to wait until you get here, but to “start thinking early about how your network is going to support you and open up doors for you” before you even leave the country. In order to drive significant transformation on an international stage, Katie found she needed to foster new connections and quickly expand on what she called her "Little Black Book on Steroids".

Katie is active in the professional networks that link Kiwis in sport leadership positions around the world and is also committed to mentoring up-and-coming talent from home. “The great thing about New Zealand leaders is that they really are authentic. It’s something we should cherish,” she says. Katie feels that value-based leadership is a distinctive strength of Kiwis working abroad. “It can be easy to move into these larger global organisations and think you need to change and adapt to the different environment, and one of my messages would be ‘Don’t! Don’t do that!’ Stay networked with New Zealand, be who you are, be true to your values, hold that close to you - and continue to shine!”

You can connect with Katie on LinkedIn.