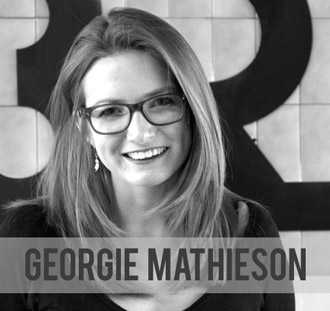 From here a contract role with Sky followed, that involved looking after the internal 80 page glossy magazine that is distributed to internal staff – such as the call centre’s and customer facing staff. A great opportunity then arose to manage a global re brand for a recruitment company so Georgie jumped at the chance. As the months turned over, looming also was the deadline on the 2 year visa. So the option at that point was to look into opportunities in Melbourne, but a love affair with London was beginning to take shape.

“A little cliché to say but I think London is the gift that keeps on giving. So many opportunities, and I feel like even if I lived here for 5 years I would still keep on discovering so many pockets of goodness. To have experienced being in the host country for the Olympics was brilliant as well as being here for the Queen’s jubilee.”

An informal chat with a friend led to a meeting with a fellow New Zealander that had established a design agency. With nothing to lose Georgie accepted the role of Digital Project Manager, transitioning from a career client side to agency side within a very technical role. Georgie credits the New Zealand owner for taking her on when her skill set was not an exact match.

“I think London could learn from NZ to be more open minded as to what individuals can bring to a role. Pigeon holing – you absolutely get pigeon holed in London, especially with no London experience, if you haven’t got the exact skill set you won’t be considered for a role.”

Not long after, the position for Head of Client Services became available which Georgie grabbed with both hands and now has recently been appointed as the Managing Director.

“My advice for moving here would be to be patient. Yes bank accounts take a long time to get set up as does job hunting. Be patient in acquiring UK experience, as once you do it will open up a lot of opportunities. We have a great reputation for being hard working, down to earth and we should be proud of what we do.”