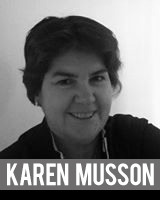 Karen Musson shakes her head and laughs as she recalls her university studies, "We used to have to compile code and then book in a machine to run this separately, whereas we can process this within seconds now...can you believe it!". Karen was one of the first to study Computing at Massey University in the 80's, at a time when Apple Macs were just starting to be used in labs and many concepts such as data structures/fields were still abstract and difficult to understand. However, she admits her spreadsheet skills and knowledge of formulas have stood her in good stead to this current day.

Leaving university in 1989, Karen initially took a role with the Ministry of Forestry as an Analyst Programmer, but at that time both she and the Ministry had little understanding of what that would involve. She spent several years supporting the Wellington office by setting up networks, installing programmes, repairing PC's, recovering files and a host of other support functions, before being promoted to IT Manager. Her role then expanded to have nationwide coverage, and she was tasked with installing all computer facilities for a new building when Head Office moved, which she felt provided a "good grounding" and allowed her to gain a "breadth of knowledge without specialising too early".

Growing up in the Hawkes' Bay, Karen was a keen cricketer and represented NZ at a national-level for many years, before travelling in 1993 to the World Cup in England. Although NZ bet Australia and the West Indies to make the final, unfortunately the team lost to England on their home turf. However, this trip picqued Karen's interest in all things British, and she decided to make the move in 1996, sleeping on a friend's floor and searching for her next opportunity. Resisting efforts to be pigeon-holed and specialise, Karen accepted a role as a Project Manager with the BBC, which she felt would allow her to utilise and acquire a wide range of skills and expertise.

Karen's first project was to install Windows 95, although this was easier said than done as the BBC did not keep accurate records of their staff, or indeed where they were located. In the manner of Sherlock Holmes, Karen spent much of her time tracking down staff and establishing their needs, before she could implement the software.

Upon its completion, Karen was then commissioned to roll out a unified BBC email platform, as due to the complexity and number of systems involved emails were taking 4-5 hours to send or not being received at all. This involved merging four back-end platforms, six email client programs, and convincing staff to embrace and adopt the new system. The success of her project saw an 12-fold increase in the amount of emails sent and received within 3 months, and enabled the BBC to reliably respond to questions during a live show which had never been attempted previously due to the erratic nature of email messaging.

Karen then used her valuable project management skills as a springboard, and moved to manage other projects including a multi-million transformation for IBM. This involved automation of various platforms, and was over budget and behind schedule when she took it on. After getting the right staff on board, Karen spent 21 months pulling all the pieces together, negotiating overspends with the client, and managing an extensive team of project managers, even admitting that "there was a long time when I though the project wouldn't be brought to a close".

A problem solver to her core, Karen enjoys the challenge and diversity of project management, as well as trying to anticipate and remove potentially costly obstacles which could blow out costs or prevent a project finishing on time. She feels her computing background allows her to pinpoint the right questions to ask of those involved, and in the process gain the respect and buy in of techies and project managers alike. Recently, Karen's interest in web design has seen her undertake a taster course in web and software development which has involved learning to design Mac iOS and apps, and allowed her to upskill in what is becoming a fast growth area.

Throughout her years in the UK, networks such as the NZBWN have offered an important source of support and inspiration for Karen who also belongs to others in the technology space such as Women who Code, Ladies who Code, and Women in Tech, and the Women’s Equality Party. She feels that no-one understands your journey quite like another kiwi who speaks the "same language", and that it reminds you of how far you have come as part of a select group who are both talented and strong enough to succeed overseas.

Karen is currently looking to study a short course in organisational psychology and would appreciate any tips or advice from those in the Network who work in this field.